ICC – International Camp on Communication and Computers is an international, educational, summer camp, specializing exclusively in visually impaired young people. It is held in the summer months and every year in a different state. The camp works so that young people (16 to 25 years old) actively participate in workshops during the 10 days of the camp where they develop their information, mmunication and social skills in order to facilitate inclusion in the life of the community in which they are educated, live and /or work.

HISTORY OF THE ICC

Professors at the Universities of Linz and Krshrue have been thinking about how to help visually impaired young people become interested in continuing their education at higher education institutions after completing their secondary education. That is why in 1993 they presented to the general public the concept of ICC, which was first realized at the University of Linz, where the idea received support, and the participants agreed to transfer this model to the international level. As early as 1994, the camp took on international proportions. Since then, the ICC camp has been held in various countries across Europe. So far, more than 2,000 users and 1,500 experts have participated in the camps.  The aim of the camp is to make visually impaired young people aware of the benefits of efficient use of information, communication and assistive technologies, to promote the need to improve technical and social skills and to raise the level of mobility of these young people.

UP2DATE CENTER, NATIONAL COORDINATOR ICC IN THE REPUBLIC OF CROATIA

The appointment of the UP2DATE Center as the national coordinator in 2013 is the result of intensive and successful international cooperation. Since then, we regularly take our visually impaired young people to ICC camps and their impressions are more than positive.

"I met a lot of young people from other countries, which was very interesting to me. Apart from the workshops, which were instructive and in which I learned a lot of new information, such as the European Erasmus program, which can be used to study in other European countries, I enjoyed it the most in leisure activities: tandem cycling and canoeing across the lake.
Richard Škaron
"I experienced ICC 2014 as a completely new and useful experience. In addition to the opportunity to improve my English language skills, I had the opportunity to improve my independent work on the computer as a blind person, and sharing information and experiences with other camp participants is useful and necessary to solve any problems they might encounter in everyday life or education. After participating in this camp, I can say that I have improved my communication and social skills, and also gained a lot of new friends. "
Antonio Vicković
"This was an unforgettable experience. During those 10 days I learned a lot in the workshops, I tried some things I didn't have the opportunity at home such as riding a tandem bike, dancing salsa, cooking, etc. I met a lot of interesting people and learned a lot of new expressions in English. In short, it was really great, I would go again. "
Dejana Rakić
"Camp is really something perfect. I didn't really like the food, but the workshops and accommodation were great. I've never had so much fun and I'd like to participate again."
Ilija Nikolić
"It was wonderful for me at the camp. The team was really great, I met a lot of new people and finally got rid of the fear of speaking English. I learned a lot of useful and interesting things, and expanded the repertoire of swear words in different languages. I would really like to and come to camp next year because this icc was a wonderful experience for me, which I will remember for a long time. "
Adriana Katić
"It's hard for me to find words to describe how wonderful it was for me at this camp. I stayed in touch with many young participants from different countries and it's wonderful that we all have some valuable experiences that we can share with each other and thus one be supportive of others. "
Kristina Krsnik
"I liked the space workshop and cooking the most. I met a lot of people from the Czech Republic, Greece, Serbia, Belgium, etc. All in all, I'm very satisfied."
Katarina Ivkić
ICC is always a good place for new acquaintances. The best for me were the communication workshops and those with the theme of diversity between our countries. My favorite though was the 3D modeling workshop where we could try 2 different 3D modeling programs. I tried to use one of these programs at home and it's very interesting. "
Mihael Drežnjak

Due to lack of funds, in 2014 UP2DATE goes to the ICC camp in Riga with only two participants (Antonio Vicković and Richard Škaron) and one volunteer (Nikola Glibo). The cost of participation was 2,258 euros.

Four participants went to this camp: Katarina Ivkić, Robert Matuš, Ivana Đurđević and Antonio Vicković and 2 volunteers: Dino Ilić and Nikola Glibo. And the numbers look like this: 65 experts, 68 visually impaired young people from 15 countries, 40 workshops were held. The cost of participation was 1,995 euros.

Four of our young participants traveled to the ICC camp in the Netherlands: Ivana Đurđević, Tea Turković, Antonio Vicković and Richard Škaron and 2 volunteers: Dino Ilić and Nikola Glibo. 14 countries participated, more than 100 people, about 140 workshops with 44 topics were held. The cost of participation was 2,793 euros.

Our team highly praised the organization of the Belgian ICC camp where the Croatian household for next year was presented. We sent 7 people to Lueven, 4 participants: Antonio Vicković, Dejana Rakić, Katarina Ivkić, Ilija Nikolić and 3 volunteers: Donatella Glibo, Dino Ilić and Nikola Glibo. The cost of participation was 3,127 euros.

In 2018, the camp was held for the first time in Croatia, organized by the UP2DATE Center, the national coordinator for ICC in the Republic of Croatia. We organized the activities of the camp in Zadar, and our implementing partners were the University of Zadar and the Croatian National Tourist Board. The Ministry of Demography, Family, Youth and Social Policy sponsored the project, and many other collaborators, donors and sponsors joined. The ICC was held from July 22nd to 31st in Zadar. 135 participants, 23 volunteers, from 17 countries gathered, 142 workshops were held on 40 topics in the field of social, communication and information skills.

Young people with impaired vision after the end of the educational international ICC camp:

In the realization of our ICC camp held in Zadar from 22 to 31 July 2018, 22 volunteers were involved and 6640 volunteer hours were realized.

Everyone deserves our great gratitude.

The project was implemented in partnership with the University of Zadar, the Croatian National Tourist Board, the City of Zadar and under the auspices of the Ministry of Demography, Family, Youth and Social Policy. The realization was carried out thanks to cooperation with other associations, the business sector and institutions. The project received financial support through tenders from other ministries, the City of Zagreb, and thanks to donations from the business sector at the local and national level, and international partners. 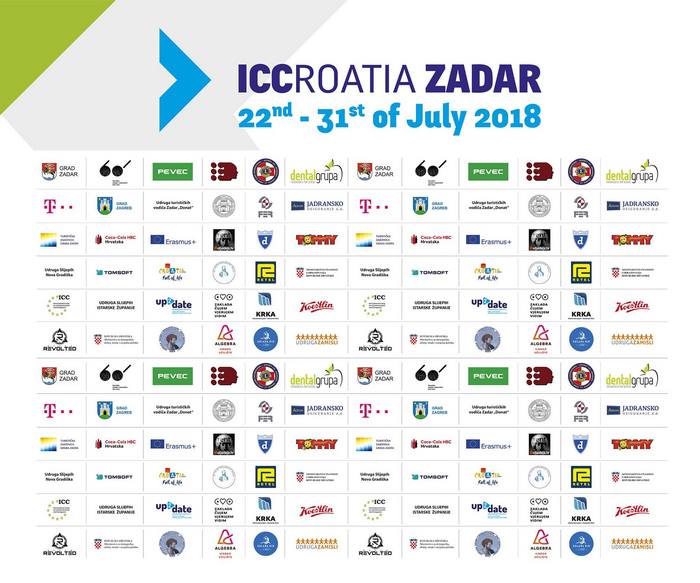 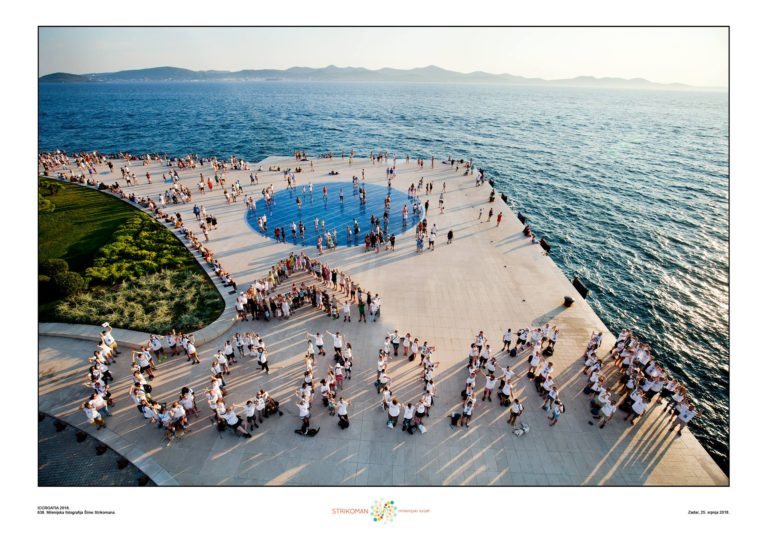 One of the most beautiful events at the Croatian ICC camp is the shooting of a millennium photo with our famous photographer Šimo Strikoman. On the Zadar seafront, Šime arranged for all participants in our camp to form letters ICCroatia which was something unusual and new for everyone.

Since the whole project was focused on a 10-day ICC camp, we consider the greatest success to connect many visually impaired young people from 17 countries, improve their independence in everyday skills and their interest in continuing the educational process either formally or informally, in Croatia or in abroad. We also think that it was a great success that this ICC camp was held outside a specialized institution, so young people with visual impairments were present in the city every day, among other people, during the tourist season and in this way the general public became aware of the existence of such a group and was partly sensitized and educated about this issue.

The Agency for Mobility and EU Programs awarded us the 1st prize for the most inclusive Erasmus + project implemented in the period from 2016 to 2018, and our story was printed in the Guide through the realized opportunities, and they also recorded a motivational video with our Antoni Vicković. 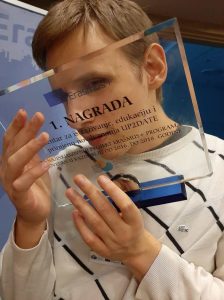 The cost of participation was 2,490 euros.

The ICC camp prepared in the Portuguese town of Aveiro, due to the global epidemic of corona virus infection, was not held, although we tested and selected our participants, namely: Karla Kordić, Marko Šainčević and Martin Šainčević.